Tokyo, Japan - January 24, 2022 - KLab Inc., a leader in online mobile games, together with BROCCOLI Co., Ltd., announced that it has been four years since the global version of the smartphone rhythm game Utano☆Princesama Shining Live was released. The Global Release 4th Anniversary Celebration begins on Monday, January 24. The celebration will feature special Photo Shoots, exclusive sets on sale, and more.

In addition, the upcoming roadmap for campaigns and updates from February to April 2022 will be revealed.

A daily free Photo Shoot will be available for a maximum of ten days.

During this once a day free Photo Shoot either the SR or UR rate will increase every pull!
In addition, Step 10 will have a UR rate of 7% and an SR rate of 30%!

Don't miss out on this chance to get rare Photos!

This Step-Up Photo Shoot consists of a lineup of Photos from August 2017 (Seaside Summer Live!) to November 2017 (Starry Night Snowy Christmas Live Part 1). All 11 UR Photos (one for each idol) will be available.

In the paid 11-Shot Photo Shoot players can choose from the 11 idols each Step and perform the Photo Shoot a maximum of three times. There is a 50% chance that the UR Photos will be a featured Photo.

In addition, on Step 3 a featured UR Photo of your selected idol is guaranteed!

Don't miss this special chance to get the UR Photo of your choice.

*Details of Round 2 will be announced in-game at a later date.

The UR and SR Photos are guaranteed to be featured Photos from the selected theme.

Don't miss out on this chance to get your favorite Photos!

To celebrate the 4th anniversary of the global release of the game, three special sets are on sale for a limited time.

For more information about the Global Release 4th Anniversary Celebration Campaign check out the in-app notices and official website. 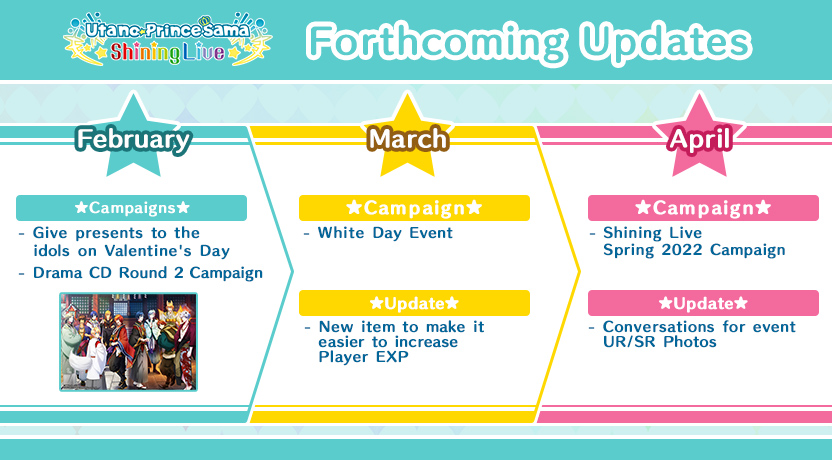 The following is the roadmap for updates and campaigns scheduled from February-April 2022.

★ White Day Event
Receive a special message from the idol who you gave a present to on Valentine's Day! This year, the idols will reciprocate your feelings..!

★ New Item for Player EXP Increase Added
Using the new item will make it easier for players to level up. Stay tuned for more details!

★ Shining Live Spring 2022 Campaign
There are a lot more campaigns planned for the rest of the year. Please look forward to more soon!

★ Conversations for Events Added
There will be new Conversation Mode dialogues added between idols who appear in event UR and SR Photos.

Thank you for your support. We hope you continue to enjoy Utano☆Princesama Shining Live!

Notes
*See the official website or in-game announcement for details and information.
*Game content is subject to change without prior notice.
*"Photo Shoots" are the in-game system where players randomly obtain the in-game "Photo" items. 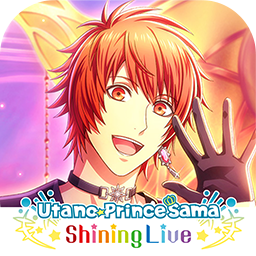 Headquartered in Tokyo and led by CEO Tomoharu Morita, BROCCOLI is one of Japan’s leading designers and producers of content based on the vast subculture stemming from the world of Japanese pop culture. BROCCOLI’s business covers a wide range of fields, including console games, trading card games, videos, and music. The company’s sphere of influence reaches beyond its own original content, extending into the design, production, and sale of character merchandise.

KLab is a leader in online mobile gaming. Founded in 2000 and headquartered in Tokyo, the company is listed on the 1st Section of the Tokyo Stock Exchange. KLab has consistently ranked as one of the top 52 grossing game publishers worldwide since 2012. With its emphasis on quality and innovative games, KLab continues to grow at a rapid pace, expanding beyond the Japanese market with an office in Shanghai. For more information about KLab, please visit https://www.klab.com/en/.