Tokyo, Japan - March 19, 2021 - KLab Inc., a leader in online mobile games, announced that its hit 3D action game Bleach: Brave Souls will start the Spring of Brave Souls Stamp Rally starting Friday, March 19 from 15:00 JST (UTC+9). Players from around the world will work together to complete the four Spring of Brave Souls campaigns. If all the missions are cleared by the end of the campaign, everyone will receive one ★5 Summons Ticket! 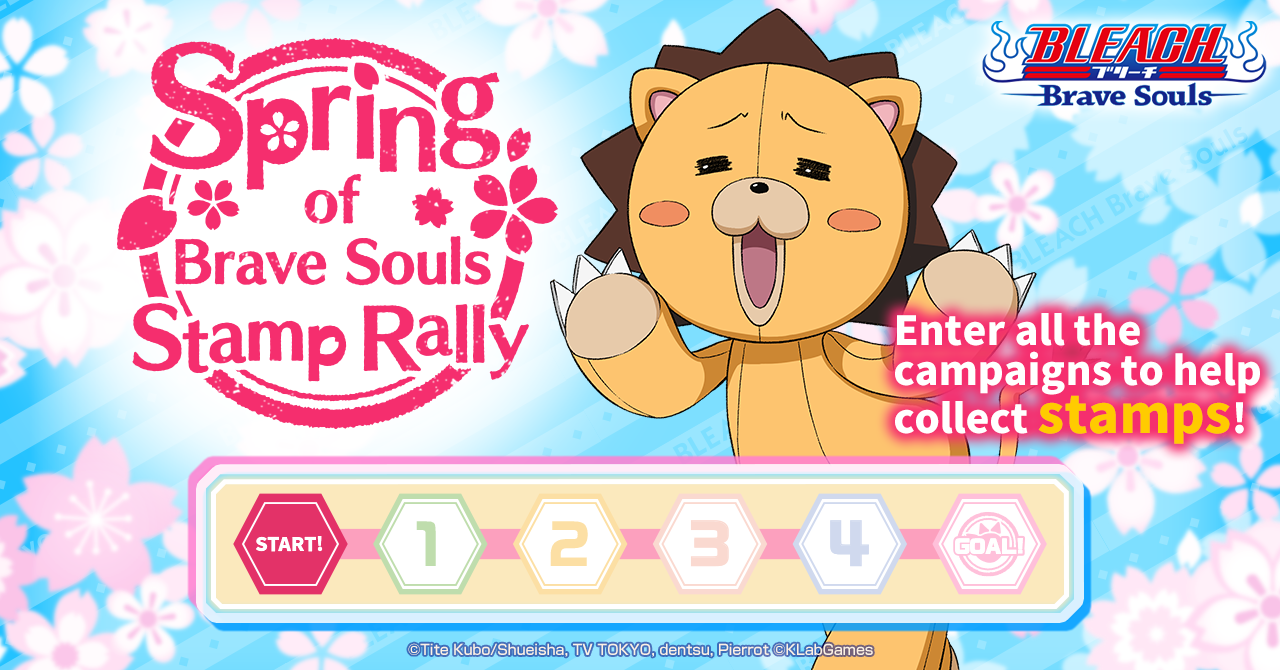 Welcome spring with Bleach: Brave Souls with the Spring of Brave Souls Stamp Rally. Enter all the campaigns to help collect stamps with players around the world from Friday, March 19 to Monday, May 10. Complete all four missions and get one ★5 Summons Ticket!

Fight together! Epic Raid Boss Challenge!
Mission: Defeat the boss together with everyone to get 3 Hogyokus and 3 Hogyoku's Wills!
From Wednesday, March 31 until Wednesday, April 7 3:59 pm JST

Discord Server Official Release
Mission: At least 2,000 people posting in the specified channel will get everyone 25 Spirit Orbs!
From Friday, April 16 until Monday, May 10 11:59 pm JST

Clear all missions for one ★5 Summons Ticket!

*Please check the in-app notifications for more details.
*Please note that campaign contents are subject to change without notice.
*Please check your Gift Box for the rewards that will be given on a later date.

Masaya Onosaka (voice of Shinji Hirako)'s program New Young TV will host a second collaboration with Bleach: Brave Souls! Katsuyuki Konishi (voice of Shuhei Hisagi and Keigo Asano) will also join as a host for the program. Subtitles for the show will also be available in English, French, Korean, Thai, Traditional and Simplified Chinese. Don't miss out on new Brave Souls information during this special collaboration!

There will also be a retweet campaign related to the show, so be sure to check it out!

Just retweet the tweet from the official account with the MASAYA ONOSAKA☆New Young TV Collaboration: Spring full of Shinjis link for the chance to be one of three lucky winners to get autographs from Masaya Onosaka and Katsuyuki Konishi!

New Growth Element Intro! Reach 10,000 views on the video to get 25 Spirit Orbs!

The Bleach: Brave Souls Official YouTube channel regularly shares the latest content and character introductions from the game. This time, the staff will be introducing new growth elements! The video will explain how to further strengthen your own characters with the new growth element.

Furthermore, the video is part of the Spring of Brave Souls Stamp Rally missions. If the video reaches 10,000 views or more, players will receive 25 Spirit Orbs.